The City by the Bay.  San Francisco is where Guillermo Wagner Granizo was born and lived when he returned from Central America at the age of 12.  Below are some murals and paintings in San Francisco that he created but none more beautiful than "Panorama of San Francisco" created in 1980.

This mural was originally displayed on the side of a building that housed Harcourt Galleries in an alley just off Powell St.  Granizo and his agents looked for the right buyer for this piece but the mural was 18' x 14'.  Granizo's eldest son decided to print posters of the murals and while doing so offered to place the "Panorama" mural at the San Francisco Airport.  The donation had to be approved by the San Francisco Art Commission and then the SFO Airport Commission. Two years later the Airport said they didn't have a wall large enough for it,  In the meantime, the mural was being stored in a warehouse and sadly, the mural was destroyed.  Someone driving a forklift  at the warehouse knocked the mural over and shattered it beyond repair.  Only small sections of the mural remain and are held by the family.

Other Granizo's murals in the San Francisco Area include extensive mosaics that were done for the Steinhart Aquarium.  The original mosaic was made of Venetian glass tiles.  In later years Granizo covered walls of the aquarium with rock and glass pieces both in the public areas as well as down in the operations area.  When the aquarium was renovated in the 90's, the walls came down and so did the murals.  Only a few pieces remain throughout the aquarium and the Academy of Sciences in the Golden Gate Park.  (see photos below)

Other murals can bee seen at Mission Dolores and in some in private buildings around town.  He also did some beautiful murals for one of  his favorite Mexican Restaurant's (El Faro) in the mission district where there some magnificent scenes of the Latino culture .

In 1984 he was commissioned to do a mural of Sausalito for the annual Art Festival. 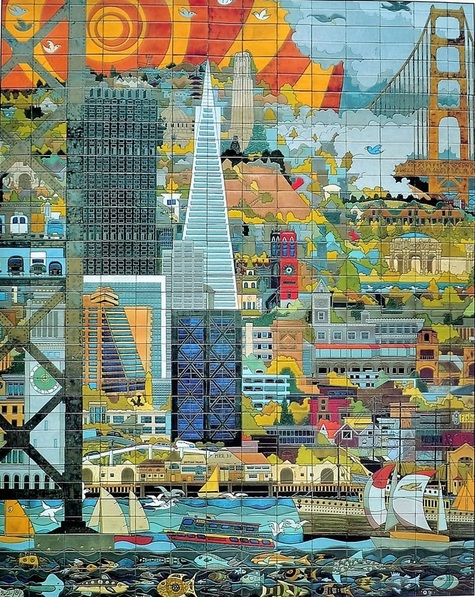 Both posters are available for sale.  If interested go to the "More" tab above and then to "Store".
Mural at Mission Delores 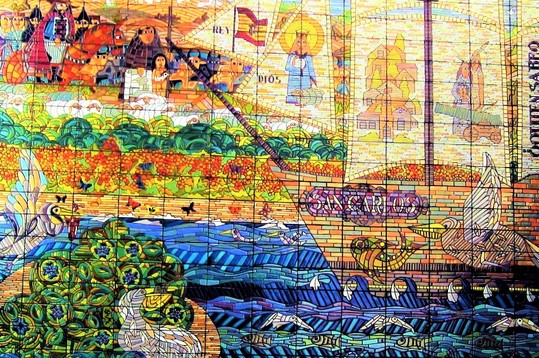 ​This mural depicts the arrival of the ship "SAN CARLOS" in San Francisco Bay while presenting at the same time the arrival of the military representative of Spain, Juan Bautista de Anza, and Father Junípero Serra to symbolize the bringing of the Good News of the Christian Gospel to the natives of California. Father Serra holds in his hand a plan for the facade of Mission Dolores.The sails of the ship tell the story of the coming of civilization to the area.
EL Faro Restaruant